Squids are molluscs from cephalopoda, with a body (mantle) where they have all their organs. In the extreme of the body they have their eyes, mouth and several arms, being 8 arms and 2 tentacles in the case of squids. Squids are widespread in the world, with 290 species, from which about 30–40 species have substantial commercial importance.

The raw materials used to make CalaMarine® are derivatives from the food production of three species of squid. These three species are:

These three species of squid exceeded in 2014 and 2015 a yearly catch of 2 million tons. The largest part of this catch is used to make calamari rings and fillets for many of the major food markets in the world. However, the arms also have a high commercial value, and other kind of products such as dried and fermented squid can be found. Squids are considered a delicacy throughout Asia, Europe and North and South America and the demand is increasing. 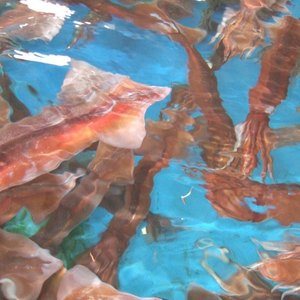 Squids live an average of 1 year, with a maximum lifespan of less than 450 days. With such a short life, they grow fast and reach reproductive age quickly, generally when they have 40% of the maximum mantle length. This can take 2-3 months for males and 4-6 months for females. Normally they are able to lay 200 000 eggs and then they usually die after spawning.

Squids live in depths from 0 to 800 m depending on the species. For eating, they grab their preys with 2 of their 10 strong arms and quickly take them into their mouth, where they eat them alive using their powerful beak. They eat crustaceans, fish, gastropods, among other species, including episodes of cannibalism in some cases. Their diet is very flexible, which makes them animals with high adaptability. They are hunters and preys at the same time and besides this, they show signs of intelligence much more superior to other invertebrates. Other smart strategies of survival include the use of ink to escape from predators.

Squids are very voracious but their growth rate is very fast and under some conditions they can use 50% of the weight of food they take to increase their size. This size can vary a lot depending on the species. Todarodes pacificus has a maximum of 50 cm and 0,5 kg; Illex Argentinus 40 cm and Dosidicus gigas can reach a length of 1,5 m, being the mantle 50-80 cm. However, there have been reported squid species of several meters of length, which are the basis of the legendary kraken, but these species live in very deep waters and don’t have commercial value.

Reference:
Food and Agriculture Organization of the United Nations (FAO).